If You Are Stopped or Detained for Taking Photographs

Taking photographs of things that are plainly visible from public spaces is a constitutional right – and that includes federal buildings, transportation facilities, and police and other government officials carrying out their duties. Unfortunately, there is a widespread, continuing pattern of law enforcement officers ordering people to stop taking photographs from public places, and harassing, detaining and arresting those who fail to comply.

When in public spaces where you are lawfully present, you have the right to photograph anything that is in plain view.

That includes pictures of federal buildings, transportation facilities, and police. Such photography is a form of public oversight over the government and is important in a free society.

When you are on private property, the property owner may set rules about the taking of photographs.

If you disobey the property owner's rules, they can order you off their property (and have you arrested for trespassing if you do not comply).

Police officers may not confiscate or demand to view your digital photographs or video without a warrant.

The Supreme Court has ruled that police may not search your cell phone when they arrest you, unless they get a warrant. Although the court did not specifically rule on whether law enforcement may search other electronic devices such as a standalone camera, the ACLU believes that the constitution broadly prevents warrantless searches of your digital data. It is possible that courts may approve the temporary warrantless seizure of a camera in certain extreme “exigent” circumstances such as where necessary to save a life, or where police have a reasonable, good-faith belief that doing so is necessary to prevent the destruction of evidence of a crime while they seek a warrant.

Police may not delete your photographs or video under any circimstances.

Officers have faced felony charges of evidence tampering as well as obstruction and theft for taking a photographer’s memory card.

Professional officers, however, realize that such operations are subject to public scrutiny, including by citizens photographing them.

Note that the right to photograph does not give you a right to break any other laws.

For example, if you are trespassing to take photographs, you may still be charged with trespass.

If you are stopped or detained for taking photographs:

With regards to videotaping, there is an important legal distinction between a visual photographic record (fully protected) and the audio portion of a videotape, which some states have tried to regulate under state wiretapping laws.

Photography at the airport

Photography has also served as an important check on government power in the airline security context.

The Transportation Security Administration (TSA) acknowledges that photography is permitted in and around airline security checkpoints as long as you're not interfering with the screening process. The TSA does ask that its security monitors not be photographed, though it is not clear whether they have any legal basis for such a restriction when the monitors are plainly viewable by the traveling public.

The TSA also warns that local or airport regulations may impose restrictions that the TSA does not. It is difficult to determine if any localities or airport authorities actually have such rules. If you are told you cannot take photographs in an airport you should ask what the legal authority for that rule is.

The ACLU does not believe that restrictions on photography in the public areas of publicly operated airports are constitutional.

Know Your Rights with Joseph Gordon-Levitt, The Gregory Brothers and the ACLU! 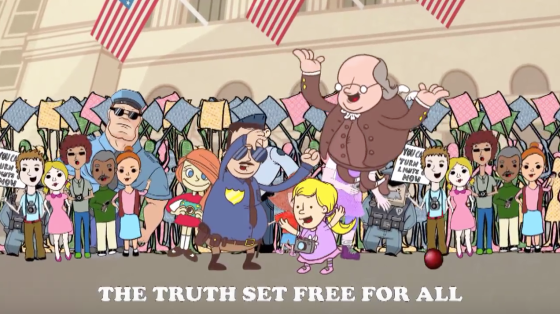