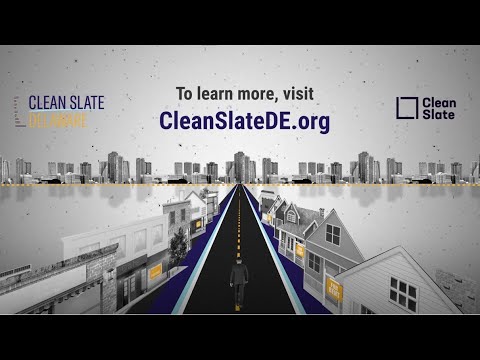 America’s decades-old culture of tough-on-crime policies has created an unprecedented crisis in our legal system: A staggering number of Americans find themselves locked in a paper prison, with no end to their sentence, even after they’ve served their time. Clean Slate Delaware aims to expand access to second chances through legislation, advocacy, and public education efforts that will expand expungement eligibility and help more eligible records access expungement.

Up to 400,000 people who have a record in Delaware live with limited access to jobs, housing, education, starting a business, or participating fully in social and civic community life. 290,000 of those people are eligible for mandatory expungement, but eligibility for expungement doesn't always mean access to expungement.

Following the passage of Clean Slate legislation in 2021, the Clean Slate Delaware campaign works to expand access to second chances by ensuring that people living with a Delaware record are aware of eligibility requirements, updated laws, and how they can start the process of clearing eligible records.

There are currently no events scheduled.

Angela’s teen years were clouded by difficulties that landed her a record. For her, access to record clearance would mean having a Clean Slate and a second chance at jobs, education, housing, credit, and more.

Receiving an expungement would give Angela a real second chance at participating authentically in her community. Angela’s story is one of many.

More than a decade after Gina reentered society, her record still holds her back from finding jobs, housing, and social services opportunities.

Gina has long since moved past old chapters in her life, but Delaware hasn’t caught up yet. A #CleanSlate and a second chance would give her the freedom she needs to fully live her life and participate in her community. Expanding access to expungement will grant second chances to hundreds of thousands of Delawareans like Gina.

In 2018, the General Assembly passed a major juvenile expungement bill, giving Delaware Family Court the option to immediately expunge a felony arrest record if a child is found not delinquent or the charge is dismissed, eliminating the need for a separate application and proceeding.

In 2019, the General Assembly passed another important expungement bill expanding access to second chances for adult Delawareans by creating adult expungement opportunities for most misdemeanors and felonies after a 3-7 year waiting period (depending on the underlying crime) without another conviction.

Last year, we added to our list of wins with the passage of HB 244 (fines & fees reform) and HB 447. When Delawareans face court-ordered fines and fees, many are unable to pay the amount they’ve been assigned. This can begin a “debt spiral,” leading from fines and fees to incarceration to more court-ordered debts. HB 244 elimated a number of fines and fees, and prohibits the Division of Motor Vehicles from suspending driver’s licenses as a penalty for nonpayment of a fine, fee, costs, assessment, or restitution.

House Bill 447 requires that cases or charges that are more than 7 years old be treated as "resolved in favor of" a child or adult if there is no disposition available for the case and no outstanding warrants. This clarification will:

The Second Chance Gap Initiative of Santa Clara University conducts research to draw attention to the tens of millions of Americans who have completed their time but remain stuck in “paper prisons.” They are burdened by criminal records eligible to be removed, but— due to administrative, debt, and other hurdles—remain on their records, often barring employment, housing, voting, and reintegration opportunities. This report highlights those second change gaps in Delaware.

The consequences of a run-in with the law can persist for decades after the formal sentence has been served. People with records face major barriers to employment, housing and education, effectively condemning them to second-class citizenship. This study by J.J. Prescott and Sonja B. Starr, professors at the University of Michigan Law School, shows the benefits of giving people a clean slate.

A Criminal Record Shouldn't Be a Life Sentence to Poverty

The Center for American Progress, Community Legal Services of Philadelphia, and the National Employment Law Project finds that because 1 in 3 American adults has a criminal record, barriers to housing, employment, education, and other barriers to opportunity have contributed greatly to poverty and racial inequality.