The First Amendment right to join with fellow citizens in protest or peaceful assembly is critical to a functioning democracy. But it is also unfortunately true that governments and police can violate this right through the use of mass arrests, illegal use of force, criminalization of protest, and other means intended to thwart free public expression.

Standing up for your right to protest can be challenging, especially when demonstrations are met with violence. But knowing your rights is the most powerful weapon you have against police abuse. Here’s what you need to know before heading out to exercise your constitutionally protected right to protest. 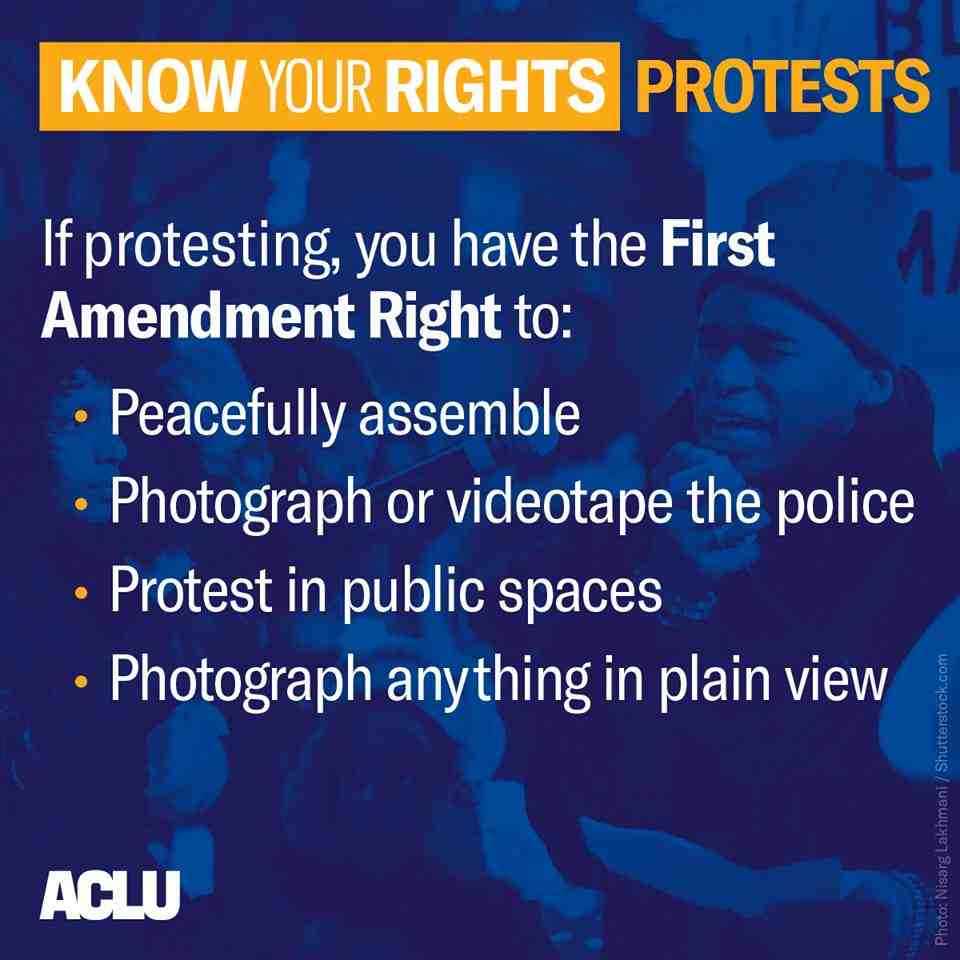 Can my free speech be restricted because of what I say — even if it is controversial?

No. The First Amendment prohibits restrictions based on the content of speech. However, this does not mean that the Constitution completely protects all types of speech in every circumstance. Police and government officials are allowed to place certain narrowly drawn "time, place and manner" restrictions on the exercise of First Amendment rights — for example, permit requirements for large groups using public parks or limits on the loudness of sound amplifiers. Any such restrictions must apply to all speech regardless of its point of view.

Where can I engage in free speech activity?

Generally, all types of expression are constitutionally protected in traditional "public forums" such as streets, sidewalks, and parks. In addition, you may have a right to speak in other public locations that the government has opened up for unrestricted public speech, such as plazas in front of government buildings.

How about on private property?

The general rule is that the owners of private property can set rules for speech on that property. If you disobey the property owner's rules, they can order you off their property (and have you arrested for trespassing if you do not comply). But your speech may not be restricted if it is taking place on your own property or with the consent of the property owner.

Do I need a permit before I engage in free speech activity?

Not usually. However, certain types of events require permits. For example:

Many permit procedures require that the application be filed several weeks in advance of the event. However, the First Amendment prohibits such an advance notice requirement from being used to prevent protests in response to recent news events. Also, many permit ordinances give too much discretion to the police or city officials to impose conditions on the event, such as the route of a march or the sound levels of amplification equipment. Such restrictions may violate the First Amendment if they are unnecessary for traffic control or public safety, or if they interfere significantly with effective communication to the intended audience. A permit cannot be denied because the event is controversial or will express unpopular views.

If organizers have not obtained a permit, where can a march take place?

If marchers stay on the sidewalks and obey traffic and pedestrian signals, their activity is constitutionally protected even without a permit. Marchers may be required to allow enough space on the sidewalk for normal pedestrian traffic and may not maliciously obstruct or detain passers-by.

May I distribute leaflets and other literature on public sidewalks without a permit?

Yes. You may approach pedestrians on public sidewalks with leaflets, newspapers, petitions, and solicitations for donations without a permit. These types of free speech activities are legal as long as entrances to buildings are not blocked and passers-by are not physically and maliciously detained. However, a permit may be required to set up tables or other physical structures.

Do I have a right to picket on public sidewalks?

Yes, and this is also an activity for which a permit is not required. However, picketing must be done in an orderly, non-disruptive fashion so that pedestrians can pass by and entrances to buildings are not blocked.

What do I do if I get stopped by the police?

Stay calm, be polite, and don't run. Don't argue, resist, or obstruct the police, even if you are innocent or you believe that the police are violating your rights. In some states, you must give your name if asked to identify yourself, but you do not have to provide an ID or other paperwork. Make sure to keep your hands where police can see them. Point out that you are not disrupting anyone else's activity and that the First Amendment protects your actions. Ask if you are free to leave. If the officer says yes, calmly and silently walk away.

And if I'm under arrest?

Do not resist arrest, even if you believe the arrest is unfair. If you are under arrest, you have a right to ask why. Otherwise, say you wish to remain silent and ask for a lawyer immediately. Don't give any explanations or excuses. Don't say anything, sign anything, or make any decisions without a lawyer. You have the right to make a local phone call, and if you're calling your lawyer, police are not allowed to listen.

Can I be searched?

You never have to consent to a search of yourself or your belongings. Police may "pat down" your clothing if they suspect you have a weapon, and may search you after an arrest. You should not physically resist, but you have the right to refuse consent for any further search. If you do explicitly consent, it can affect you later in court.

What do I do if my rights have been violated?

Remember: the street is not the place to challenge police misconduct. Don't physically resist officers or threaten to file a complaint. As soon as you can, write down everything you remember, including officers' badge and patrol car numbers, which agency the officers were from, and any other details. Get contact information for witnesses. If you are injured, take photographs of your injuries (but seek medical attention first). Once you have this information, you can file a written complaint with the agency's internal affairs division or civilian complaint board; in many cases, you can file a complaint anonymously if you wish. You can also seek the assistance of an attorney or the ACLU.

Do I have the right to photograph or videotape during protests?

Yes. When you are lawfully present in any public space, you have the right to photograph anything that is in plain view. That includes pictures of federal buildings, transportation facilities, and the police. When you are on private property, the property owner may set rules about the taking of photographs or video. Police officers may not confiscate or demand to view your digital photographs or video without a warrant, nor may they delete your photographs or video under any circumstances. However, they may legitimately order citizens to cease activities that are truly interfering with legitimate law enforcement operations.

Some local governments have required a fee as a condition on larger groups exercising their free speech rights, such as application fees, security deposits for clean-up, or charges to cover overtime police costs. Charges that cover actual administrative costs have been permitted by some courts. However, government may not charge higher fees because an event is controversial (or a hostile crowd is expected to react to the speech).

What if we can't afford the fees?

Do counter-demonstrators have free speech rights?

Yes. Although counter-demonstrators should not be allowed to physically disrupt the event they are protesting, they do have the right to be present and to voice their displeasure. Police are permitted to keep two antagonistic groups separated but should allow them to be within the general vicinity of one another.

Does it matter if other speech activities have taken place at the same location?

Yes. The government cannot discriminate against activities because of the controversial content of the message. Thus, if you can show that similar events to yours have been permitted in the past (such as a Veterans or Memorial Day parade), then that is an indication that the government is involved in discriminatory enforcement if they are not granting you a permit.