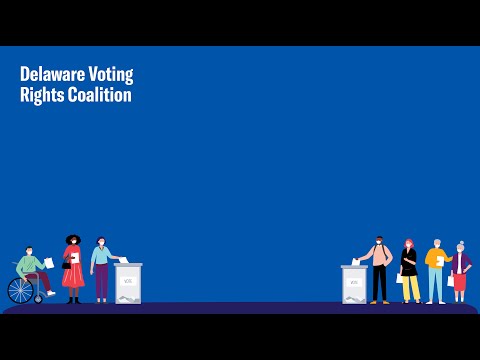 WILMINGTON — Earlier today, at a virtual press conference that was streamed to social media, several community organizations from across the state came together to publicly launch the Delaware Voting Rights Coalition (DVRC), Delaware’s first statewide coalition focused strictly on expanding access to voting.

The coalition’s first priority is the passage of House Bill 75, a constitutional amendment seeking to empower the General Assembly to implement a permanent avenue to no-excuse absentee voting in our state’s Constitution.

“The way our state Constitution is written right now, very clearly in a prescriptive way, outlines the exact circumstances under which somebody can vote absentee,” Bentz said. “This prevents us from going into the state code to amend absentee voting law and things like that to make it more accessible and allow more people to utilize it, because the constitutional language is so restrictive.”

In order to strengthen our democracy and ensure every eligible voter can exercise their freedom to vote conveniently and reliably, DVRC supports reforms to broaden access to the ballot, whether in person or by mail.

The coalition supports clear and practical reforms which give all Delawareans a permanent option to cast their ballots remotely. Additionally, the coalition believes in implementing statewide same-day registration, permitting all eligible voters to both register and vote on Election Day or during an early voting period.

Delaware currently makes voters register 25 days before an election, one of the longest deadlines allowed by federal law. Currently, 21 other states permit some form of same-day registration, and 34 states allow citizens to vote absentee without needing an excuse. It’s time to break down unnecessary barriers to voting in Delaware.

The Coalition aims to empower communities, especially communities of color, people who speak English as a second language, people involved in the justice system, and young people, to identify and remedy barriers to the ballot box. The coalition is ready to work with legislators, local election officials, and the Department of Elections to make these reform recommendations a reality.

“The Black community has strived for voting access as a means of both empowerment and justice in pursuit of the American dream for years, decades now,” Jordan-Cox, president of the Sigma Gamma Rho Sorority, Inc., Alpha Nu Sigma Alumnae Chapter, said. “Removing unnecessary barriers to voting will increase voting participation and help us reach our goals and becoming a more just nation that is stronger together.”