ACLU-DE Announces Electoral Engagement Campaign in RDs 1, 2, and 13 Ahead of September 13th Primary 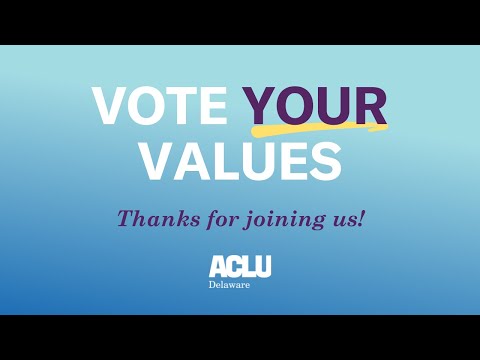 ACLU-DE Announces Electoral Engagement Campaign in RDs 1, 2, and 13 Ahead of September 13th Primary

WILMINGTON—At a press conference earlier today, the ACLU of Delaware (ACLU-DE) announced their ongoing voter engagement efforts ahead of the 2022 Primary Election, revealing results from a poll on important issues facing Delawareans, and a targeted mobilization effort to elevate these critical issues in House Districts 1, 2, and 13.

Three issues were spotlighted: abortion access, Smart Justice, and renters’ rights. During a virtual press conference held via Zoom webinar and livestreamed on the ACLU-DE Facebook page, several panelists spoke about the efforts to engage and educate voters to elect candidates who are in support of these important civil liberties issues.

Public Policy Polling conducted a poll of Democratic voters in New Castle County in August 2022, commissioned by ACLU-DE. The poll revealed that voters show incredible support for some of the most hotly debated issues in Delaware — and candidates should take note:

“Voters have the ultimate say in what is prioritized in Legislative Hall,” said Devotta. “We have the power to elect lawmakers who can turn our priorities into action. Voters have made it clear where we stand on these vital issues — now we want you to vote your values in the Primary and General Elections by electing candidates who stand with you in support of civil liberties.”

The organization also outlined targeted voter engagement efforts in House Districts 1, 2, and 13 — some of Delaware’s most closely watched races in this year’s Primary Election. Through direct mailers, digital advertising, phone calls, and texting, ACLU-DE’s Action Fund announced a robust investment of more than $50k to launch a campaign aimed at educating voters in these districts on where their candidates for State Representative stand on these key issues.

“We are engaging in electoral work because this is when we have the greatest political power to impact policy – when politicians are most in tune to what voters care about,” said Rich. “We chose to highlight specific issues in RD 1, 2, and 13 because those are issues that the incumbents in those districts have specifically taken action – or not taken action – on. Election time is when candidates are most open to the pressure and most willing to move on policy so our goal is to make sure candidates know civil liberties and civil rights issues matter to voters.”

These efforts are part of the larger ACLU-DE Voter Campaign, aimed at educating and mobilizing voters statewide on key ACLU issues. To learn more about the campaign, see responses to the campaign’s candidate questionnaire, or learn more about voting in the 2022 Primary and General elections, visit VoteDelaware.org.

A press packet with the polling results and copies of mailers sent to voters in RD 1, 2, and 13 is attached to this page.

Today is the First Day of Early Voting!

How to Vote in Delaware's Primary Election: What's New in 2022

Join us in Protecting our Democracy – Become an Election Protection...