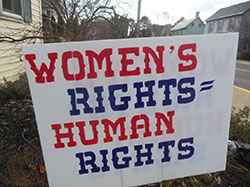 On September 21, 2017, the Town of Milton settled our lawsuit brought on behalf of a homeowner who had been prevented from putting political signs in her yard by the Town’s unconstitutional sign law. The law prohibited the display of “political” signs except for the months preceding an election and for two weeks after, while allowing other signs year-round. The settlement follows the Town’s revision of the sign ordinance to meet the ACLU’s demand that the ordinance be corrected.

The settlement came in the case of Nickerson v. Town of Milton, which was filed in Delaware state court in May 2017 and then moved to federal court by the Town. The suit explained that the Milton Town Code violates the free speech provision of the First Amendment of the United States Constitution and Article I, Section 5 of the Delaware Constitution.

“We are happy the Town has revised its unconstitutional sign code,” said Richard Morse, ACLU of Delaware Legal Director. “Every town should be on notice that sign laws that restrict signs based on the content of the signs are suspect. With few exceptions, they are unconstitutional.”

Following the 2016 presidential election, Penny Nickerson, a retired school teacher who owns a home in Milton, posted four signs on her property with messages such as “Love Trumps Hate” and “Women’s Rights = Human Rights.” In mid-February, she was told that the signs violated the town code because they were political. Penny complied with the request to remove the signs, but tried to inform Milton that the ordinance was unconstitutional. She asked for a meeting with town representatives, but she was denied.  So she turned to the ACLU for assistance.

Responding to the revision of the ordinance, Ms. Nickerson said, “I am delighted. I wish the Town had just listened to me back in February, but I’m grateful that the ACLU was there to protect our free speech rights and make the Town follow the Constitution.”

The Town of Milton's unconstitutional code permitted many types of messages to be displayed on private property year-round, including church and non-profit messages, professional announcements and advertisements, and real estate and contractor signs. Signs considered by the town to be political were only allowed to be displayed 90 days before and 14 days after a contested election or referendum. 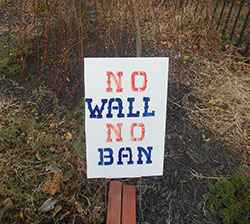