Voting Rights Are Due to All

The Metropolitan Wilmington Urban League Young Professionals and the Delaware Human Relations Commission sponsored a forum on voting rights in celebration of Black History Month. They asked me to prepare remarks on Felon Voting Rights—some excerpts are below:

Voting is a Right—Not a Privilege

Well over 5 million people throughout the U.S. with a felony conviction are disenfranchised—that is, they are barred from voting in elections. Each state has its own laws on disenfranchisement. While Vermont and Maine allow felons to vote while in prison, eleven other states, including Delaware, permanently restrict certain felons from ever voting again.

Those who support felon voting restrictions say they are consistent with other voting limitations such as age, residency, or sanity. But the ACLU believes that in a democracy—voting is a right—not a privilege. And that any effort to block those with felony convictions from voting —if fact any effort to erect barriers to voting for any citizen—is unfair and essentially undemocratic.

Felony disfranchisement disproportionately impacts people and communities of color. Today, over 1.5 million of our disfranchised citizens are African-American. 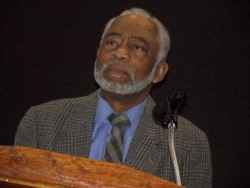 In fact, the development of felony disenfranchisement law is directly tied to the history of racial discrimination in America. In 1870, during the post-Civil War Reconstruction era, the 15th Amendment was passed banning race-based disfranchisement. This did not sit well with many, so in order to restrict the political participation of these newly-enfranchised African-Americans, Southern states began to use criminal disenfranchisement laws as a tool to suppress the African-American vote.
For example, during the 1901 constitutional convention in Alabama, voting was denied for a wide range of offenses for the first time. Restrictions applied to serious crimes such as murder and rape as well as broader, far-reaching crimes designed to target African Americans.
Some of the lesser crimes that resulted in the loss of voting rights included:

The President of the Alabama all-white constitutional convention explained that the purpose of this section of the constitution was “within the limits imposed by the Federal Constitution to establish white supremacy.”

There is no doubt that racial equality has been advanced in the past 100 years. But the “tough on crime” approach to criminal justice policy that exploded in the 70’s and 80’s and to some degree continues today, has resulted in an unprecedented number of Americans being locked up and very high levels of voter disenfranchisement, especially in the African American community.
In September of 2010, according to Project Vote,

Today, one out of every 31 adults in the U.S. are under some form of correctional control including prison, jail, probation and parole.
One in every fifteen black men age 18 and older is incarcerated.

In Delaware, blacks represent about 21% of the general population yet they represent 42% of those arrested for criminal offenses and 64% of the prison population.
In 2004, Florida had the highest percentage of disenfranchised voters of any state at 9%. Delaware, at 7.5%, was second, and Alabama, at 7.4%, was third.
When such a large portion of the African American community is caught up in the criminal justice system—it is inevitable that fewer African Americans are eligible to vote and that African American communities and interests are not adequately represented at the polls.

So, in 2004 Delaware disenfranchised 7.5% of our voters. Yet that is an improvement from what the situation in the state was previously!

When compared to other states—Delaware continues to have very restrictive felon voting laws. There are a number of problems with our law:

The bottom line is that in only two states—Kentucky and Virginia—is it harder to get back your right to vote again than in Delaware.

A Push for Reform

There is currently a bill before the Delaware General Assembly—House Bill 9 (the Hazel D. Plant Voter Restoration Act)—that would amend the state constitution to eliminate the five year waiting period for reinstatement of voting rights. The ACLU does not believe that this change goes far enough—but it is a step in the right direction.

You can support the passage of HB 9 by sending an email to your state representative using our online advocacy tool.

Why Does it Matter?

Some may ask—what’s the big deal? So many citizens who are eligible to vote don’t exercise their rights, certainly leaving the people with felony records out of the voting process shouldn’t make any difference.

But this is simply not true.

Studies have shown that the benefits of voting are numerous. Individuals who vote generally help to make their communities safer and more vibrant by giving to charity, volunteering, attending school board meetings, and serving on juries. Research also shows that individuals who vote are less likely to be rearrested.

Reintegration into society is essential to community safety and the reduction of recidivism among those who commit crimes. Restoring the right to vote helps reintegrate people with criminal records and also strengthens our democracy. Conversely, withholding the right to vote, fosters a sense of exclusion and disconnectedness.

In addition, those convicted of a felony are not the only ones who lose political representation as a result of stringent disenfranchisement policies. Studies show that many of those convicted of felonies come from the same inner-city neighborhoods. As a result, when felons lose the right to vote, it weakens the political power of the entire neighborhood—including the power of the residents who have never committed a crime.

Increasingly, the ability of communities of color and low-income communities to gain political representation and influence—and the access to public resources that accompany this influence—is being thwarted by this country's race to incarcerate and disenfranchise. Take action to reverse this trend today.