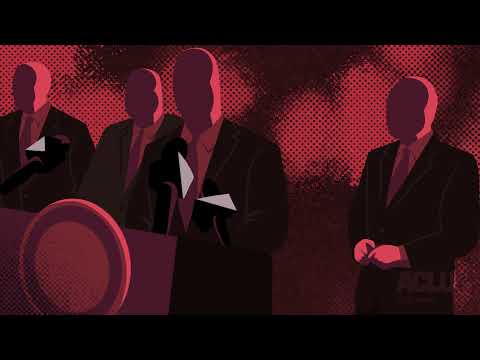 For decades, Delaware police officers have enjoyed special layers of protection in incidents of police misconduct through policies and laws that allow harmful practices like excessive use of force and block public access to body-cam recordings and investigations.

Under current laws in Delaware, the public is not guaranteed any transparency in a police-involved incident. In fact, Delaware’s Law Enforcement Officer’s Bill of Rights (LEOBOR) makes public access to police investigations nearly impossible. As a result, the public has no insight on why an incident occurred, what could have been done to prevent it, or what disciplinary actions, if any, happened as a result of the investigations. Delaware’s LEOBOR statute is the worst in the nation for transparency, making the state a leader in police secrecy.

Other laws that allow excessive use of force and body-worn camera footage to remain held from the public are additional tools that actively fuel further incidents of police misconduct — and grow the deep divide of trust between communities in Delaware and the officers who are sworn to serve and protect them.

In 2020, in response to nationwide and local protests calling for immediate and meaningful police reform after the murders of George Floyd and Breonna Taylor, the Delaware Legislative Black Caucus formed the Law Enforcement Accountability Task Force (LEATF). The LEATF was tasked with recommending reforms that the General Assembly can make to create real, actionable changes in Delaware. After more than 2 years, police misconduct has continued unchecked throughout the state, including the murder of Lymond Moses in Wilmington in January 2021 and Rodney Robinson II in March 2022 — adding to the list of more than 31 Delawareans have been killed by police in our state since 2005.

Despite lawmakers' pledges to champion police accountability and transparency, SB 149, which aimed to make police disciplinary records public, was stripped of any meaningful action during the 2022 legislative session and stalled. Read our full statement of opposition to SS1 for SB 149 here.

Only one week into 2023, yet again, we witnessed the horrific, abusive murder of Tyre Nichols by members of an institution that purports to act in our name and to keep us safe. Tyre Nichols’ killing underscores the urgent need to change the role and practices of police in our society. We must all work towards transformational change that centers care and safety — and that includes being safe from police violence. Through our grief, we will continue this struggle.

We launched the Delaware: Police Accountability NOW (D:PAN) campaign to ensure that the Chauvin verdict didn't become a forgotten moment of accountability. In the wake of continued police brutality in our state and nationwide, D:PAN advocates reaffirm our commitmemnt to meaningful legislative action to increase accountability and transparency in policing in Delaware.

Partners on This Effort Include

Senate Bills 147 & 148: Use of Force
Sponsored By: Senator Marie Pinkney

SB 147 creates a requirement that when using force, both non-lethal and lethal, an officer must “reasonably believe” that they are in danger in order to justify use of force. The law, as currently written, uses the term “believes,” which leaves unlimited room for an officer to justify use of force, whether it was warranted or not. This bill makes it clear  that use of force must be justified by what a reasonable person would have believed, rather than what the officer in question believed.
SB 148 expands the Attorney General’s ability to investigate non-lethal use of force incidents and requires that race data is tracked and reported in use of force incidents.

HB 195, formally HA 2 for HB 195, requires certain police officers and other employees of the Department of Corrections to use body-worn cameras to record interactions with members of the public. This bill would also require the Council on Police Training to create regulations for body-worn camera use to ensure consistent use in 2022.

A substitute for SB 149 (SS1 for SB 149) was introduced on March 21, 2022. We came out in public opposition to this bill because it removed any chance for effective change. Please read our full statement to learn more about our position on the SB 149 substitute bill.

Meaningful policy change must come by significantly amending Delaware’s Law Enforcement Officers’ Bill of Rights (LEOBOR). Looking ahead, we are committed to reintroducing legislation during the 2023 legislative session that does just that.

Read our full statement on SS1 for SB 149

Under current laws in Delaware, the public is not guaranteed any transparency in a police-involved incident. In fact, Delaware’s Law Enforcement Officer’s Bill of Rights (LEOBOR) makes public access to police investigations nearly impossible. We can change this. Add your name to urge the Delaware legislature to support LEOBOR reform.

Delaware’s Law-Enforcement Officers’ Bill of Rights (LEOBOR) has fueled police abuse incidents by making it virtually impossible to discipline police officers for misconduct or to know any details of misconduct incidents. No other Delaware public employees enjoy equivalent protections when it comes to disciplinary matters.

Almost 50 percent of Delawareans who have been shot by police are Black.

Under current laws in Delaware, the public is not guaranteed any transparency in a police-involved incident. In fact, Delaware’s Law-Enforcement Officer’s Bill of Rights (LEOBOR) makes public access to police investigations nearly impossible. As a result, the public has no insight on why most of these 57 shootings have occurred, what could have been done to prevent them, or what disciplinary actions, if any, happened as a result of the investigations. Delaware’s LEOBOR statute is the worst in the nation for transparency, making the state a leader in police secrecy and protection.

Here’s what we do know: Delaware over-polices Black communities, using decades of tough-on-crime-era narratives to justify harsh policing tactics and increased police violence in these communities. We only need to look as far as our state’s history of mass incarceration to see this is true — Black Delawareans make up less than 25 percent of our state’s population, but make up over 60 percent of our prison population.

Why do police shootings keep happening? Why does it continue to be Black Delawareans who are disproportionately shot and killed? Because officers know they’re protected by LEOBOR, police union contracts, and a racist narrative that has served law enforcement well for decades: that Black people commit the most crimes, and that police are responsible for keeping communities safe from those crimes.

Neither of those narratives are true, and an essential part of moving police reform ahead is recognizing those manipulative stories we’ve been fed and changing them to reflect the reality: over-policing of Black communities in Delaware is a direct result of systemic racism, and Black Delawareans are not safe under the watch of police who are meant to serve and protect them. And none of that will change unless we start taking real action to reform policing in our state, starting with increasing transparency and accountability through LEOBOR reform.

Our Statement on Proposed Police Reforms in Delaware