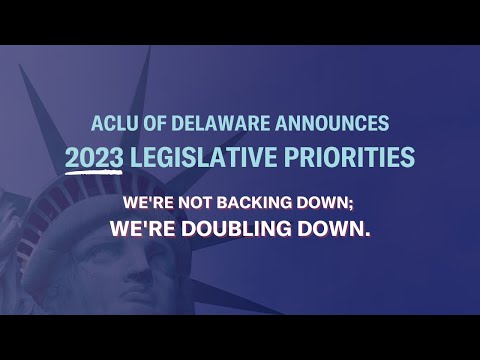 The above video is the full recording of the public briefing that took place on January 23rd regarding the priorities outlined in our letter to the 152nd General Assembly.

WILMINGTON, DE — Yesterday the ACLU of Delaware met publically with state officials to discuss key issues and bills they will be advocating for in 2023. Top priorities include the right to representation in eviction proceedings for renters, Medicaid-funded abortion, and reforming Delaware’s probation system.

The event was led by ACLU-DE’s Policy & Advocacy Director, Javonne Rich: “We have a very ambitious agenda with sound policy changes that will make our state more safe and equitable. It’s going to take all of us to make these goals a reality—legislators, community leaders, organizational partners, and all Delawareans who are committed to seeing positive change in our state.”

At the start of this year’s legislative session, ACLU-DE sent a letter to members of the 152nd General Assembly that fully described the organization’s priorities and requested support for the outlined issues. This included:

Many of these priorities follow-up on the extensive work that has already been done to protect civil liberties for Delawareans.

In 2022, the ACLU-DE advanced several issue campaigns, particularly in the realm of justice reform. The Campaign for Smart Justice — which aims to reduce the Delaware prison population by 50% — has garnered support across the state following the recent investigative story that was published on Operation Safe Streets (OSS). The story highlights the deeply traumatizing impact Delaware policing through OSS has had on Black and Brown communities and the need for accountability and reform.

In the same year, ACLU-DE advocated for renters’ right to representation in eviction proceedings. While the bill was defeated in 2022, the organization’s goal remains the same: to pass right-to-representation legislation in 2023. The bill was reintroduced on Jan 19th as SB1. With the right support, Delaware can join the growing list of states and cities that are putting protections in place to help keep more people in their homes and reduce rates of homelessness.

Yesterday’s virtual briefing allowed the public, press, legislators, and advocates to convene for discussions of how best to support these causes and what to expect in the upcoming year.

Those interested in getting involved are encouraged to visit the ACLU-DE website (aclu-de.org) and sign up for Action Updates via email. The organization will host meetings and events throughout the year for volunteers and ambassadors to help lead the way on these key issues.

If you missed the event and would like to see the full recording, it can be viewed on the ACLU of Delaware’s YouTube channel.