Litigation, Legislation, and Advocacy: ACLU-DE Spotlights Big Plans for Their Work Through 2024 at Annual Meeting 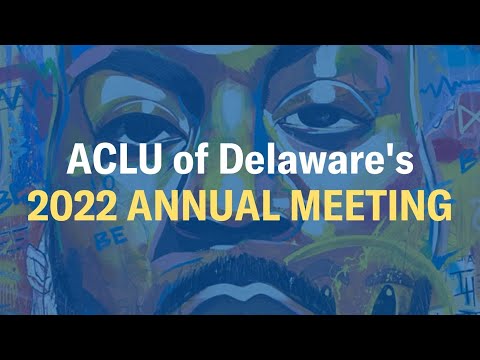 Litigation, Legislation, and Advocacy: ACLU-DE Spotlights Big Plans for Their Work Through 2024 at Annual Meeting

WILMINGTON, DE — The ACLU of Delaware (ACLU-DE) held their 2022 Annual Meeting virtually Tuesday night, offering supporters across the state an opportunity to tune in and learn more about their work planned this year and beyond.

Mike Brickner, executive director, opened the program with a note of optimism. “These are trying times in our country, but I tend to be a glass-half-full person, and a big reason for that is because every day I get to work at the ACLU of Delaware with an amazing array of staff, board members, and supporters who are working every single day to ensure justice and liberty here in the first state.”

The presentation largely focused on the organization’s three-year strategic plan, which will guide the team’s work through 2024. The plan includes five priority planks:

For the first plank, Voter Campaign Manager Meera Devotta and Communications Director Morgan Kelly talked about the launch of the organization’s voter campaign, showcasing their new voter resource: VoteDelaware.org. The voter campaign aims to educate voters and increase voter engagement, ensuring that every Delawarean who is eligible to vote has the resources and information they need to cast their ballot with confidence.

The second plank, Smart Justice, was led by Clean Slate Delaware Manager John Reynolds and Delaware Campaign for Smart Justice Manager Haneef Salaam. After a year of roadblocks on police reform through the Smart Justice campaign, the duo discussed the path ahead: how the organization will continue to fight for increased police transparency and accountability, and how increasing second chances through probation reform, reducing collateral sanctions, and ending modern day debtors’ prisons are key next steps on justice system reforms in Delaware. Reynolds also shed light on the Clean Slate campaign’s recent success with expungement access awareness for people with Delaware records. “We’ve held eight clinics and workshops across the state, and reached more than 400 people. Our clinics have partnered folks with legal representation in-person or virtually at the event so they can speak with an attorney about any questions they have about the process.”

Staff Attorney Dwayne Bensing reviewed Davis et. al v. Neal et. al, an ongoing legal battle that aims to end the pattern and practice of abuse at Sussex Correctional Institute. “We filed litigation against Sussex Correctional Institution (SCI), originally with two plaintiffs back in December, and that complaint has grown. We have heard from dozens of folks who have talked about the kinds of abuse that they’ve experienced at SCI.”

Education equity, the focus of plank three, was discussed by Senior Policy Advocate Shannon Griffin. Griffin talked about the organization’s equity in education campaign, which tackles education equity issues by engaging students, parents, and educators with a multi-pronged approach that utilizes direct service, addresses school discipline disparities, and aims to create safe, equitable school environments for all of Delaware’s students.

Mike Brickner, Development Director Melissa Bryson, and Tom O’Brien, the organization’s board treasurer, teamed up to talk about how the organization’s fundraising plan is building capacity for the work ahead. O’Brien reflected on the financial growth of the organization. “This board has been able to approve the highest budget in the history of the ACLU of Delaware. Those resources are going directly into the work on all the great initiatives that you’re hearing about tonight.”

Another facet of the fourth plank of their strategic plan, building capacity within Delaware’s Latinx community, was discussed by Charito Calvachi-Mateyko, ACLU-DE board member and founder of the Votamos / We Vote coalition. Calvachi-Mateyko reviewed the Votamos / We Vote coalition’s goals, which are focused on mobilizing Latinx voters, and commended the ACLU-DE team for their support and partnership in expanding the group’s communications and outreach capacity over the last year.

The fifth and final plank of the strategic plan is a spotlight on the organization’s effort to live the values they preach: equity, diversity, inclusion, and belonging. Board President Kathy Epler, Board Equity and Inclusion Officer Adriana Leela Bohm, and Policy and Advocacy Director Javonne Rich detailed ACLU-DE’s efforts to recognize and address internal and external points of interest in order to ensure an equitable, inclusive, and diverse organization.

More information about any of the organization’s initiatives can be found online at aclu-de.org. A recording of the annual meeting is available on the ACLU-DE YouTube channel.

Broaden the Horizon on Equity for All: Our Strategic Plan Through 2024